You work hard for your money. We all do! The last thing you want is to make an uneducated financial decision. You’ve probably heard the importance of saving for retirement and the eventuality that you will age. How is it going to affect you today though? How does a 401k affect your paycheck? By the time you finish this, you’ll have that question answered!

A 401k Affects your paycheck by withdrawing a percentage of your paycheck and investing it for you in a plan that is sponsored by an employer to grow over time and be available to you upon retirement (which is defined by the age of 59 1/2). There are exceptions, but that’s the gist.

How a 401k Affects Your Take Home Pay

This may seem obvious at first since obviously you are adding another deduction to your paycheck along with healthcare, federal taxes, state taxes, and social security. However, a 401k is more than just a deduction. Since a traditional 401k is taxed on withdrawal vice contribution, the portion that you are taxed on your paycheck will alter depending on your contribution level.

Let’s do an example. Let’s choose Arizona and say the income tax rate was 4.2% This may not be correct. It’s just an example. If you want to plug in your own actual numbers, I’ll show you a link at the end of this example. How does that sound?

Let’s assume, your employer matches 100% of your first 3% contributed and then 50% of your second 3% and they cap off the amount they will match to $5000 per year. That means if you contribute the minimum amount to get the max benefit from the company, you’ll be contributing 6% of your gross pay and your employer will be matching 4.5% (since they have the tiered contribution system.)

Here’s what your paycheck may look like with some built in assumptions before contributing to a 401k: 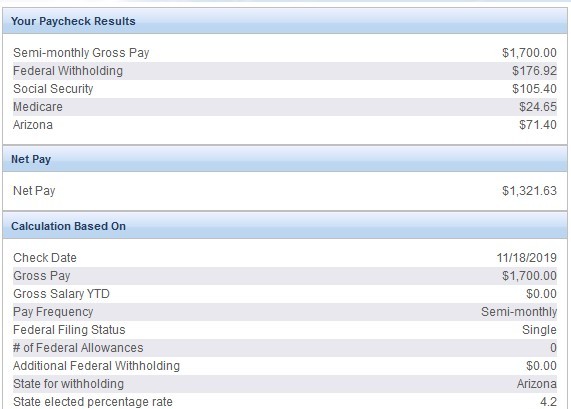 Here’s how a 401k would affect your paycheck:

When you look at the two graphs above, you’ll notice the difference is that there is a deduction based on your contribution to your 401k. You’ll also notice the contribution from your employer as well. So let’s dig a little deeper into this.

The Contribution in this example is $102 which is 6% of $1700. The Net Pay is only $85.48 less than before contributing which is because the $102 isn’t taxed when it is take out. You’ll notice that the Federal and State taxes dropped to make up for the fact that the $102 isn’t taxed. Traditional 401k’s are taxed when they are withdrawn upon retirement which means that for the time being, they are tax-deferred.

You’ll also notice that the employer contributed $76.50 because of the 4.5% contribution match. If you aren’t contributing to a 401(k), you are basically working for less pay since this contribution from the employer is a benefit added to the salary.

Plug in your own financial numbers at Paycheck City to see how your paycheck would be affected by a 401k. This is the same site that is featured in the video above.

Spread that over a year (2 paychecks a month over 12 months) and you’ll have taken home $2051.52 less but you’ll have invested $4284.00 due to your tax-free contribution and the employer match. In other words your investment more than doubles and will continue to grow as your retirement fund grows.

What’s the Difference between a 401k and an IRA?

Well, we already talked about what a 401k is. So, what is an IRA? It’s an Individual Retirement Account. A traditional IRA has a lot of the same benefits as 401k. The main difference though is that an IRA is funded by you and you have complete control of its diversification, risk, and contribution. In fact, you have to open the account yourself and manage it as well. Your employer has no interaction with an IRA.

The difference between a Traditional IRA and a Roth IRA has to do with when taxes are applied. In a traditional IRA, the contributions are tax exempt, similar to a 401k. Your contributions are taken out of your pay before taxes are applied. A Roth IRA on the other hand, has taxes taken out before the contribution is made so that when you withdraw from it in retirement, the income is tax-free. Deciding on which one is best for you can be done by asking yourself the simple question. Do you want to pay your taxes on retirement now or later.

How Does a Roth IRA Effect Your Paycheck?

If you understand the difference between a Traditional IRA and a Roth IRA, this answer is quite simple. The difference is that you will be taxed on all of your paycheck and contribute the same amount of money. That means, you’re paycheck will drop since more taxes are taken at the time of your paycheck. The trade off is that any Roth IRA contribution will not be taxed when it is withdrawn from later in life. So, rather than passing the tax buck to “Future You,” you are paying it upfront.

In the same example above, imagine that you’d pay the same taxes as the first graph but still deposit the same amount so your paycheck would drop $16.52 more because you’re paying more taxes but when you go to withdraw the money later, you’ll be able to do so tax-free.

Benefits of a Roth IRA

The major benefit for a Roth IRA is apparent to people that are generally younger because as we age, typically we start to make more money as we progress in our careers and receive higher pay. That higher pay leads to being in higher tax brackets. If we pay taxes on our income and then contribute to a Roth IRA, we will be able to withdraw that money later when we could be in a higher tax bracket, tax-free. A Roth IRA is designed for people that see themselves paying less taxes now than later.

The Government also recognizes this fact and limits the amount you can contribute to a Roth IRA annually. For 2019, the max contribution for a Roth IRA is $6000 per year ($7000 if you are 50 years of age or older). That means if you want to contribute $10,000 per year, only $7000 can be contributed to a Roth account and the other $3000 will have to be invested in a Traditional IRA account.

In the above example, $4284 was invested in a Traditional IRA but if that investor wanted to, he/she could have invested it all into a Roth IRA.

When to Contribute to a 401k

It’s never to easy to start investing in your future. In fact, I believe the earlier you start investing, the better since the longer you invest, the more time you have to allow compound interest to grow your money. You can contribute in lump sums whenever you have spare money, or set it up to be an automatic withdrawal. Everyone’s situation is different but I believe it’s best to set it up automatically so you become so used to investing, that you don’t even pay attention to the amount that you are contributing. It’s always easy to say, I’ll put some in next month and justify why you couldn’t do it this month. If it’s automatic, you don’t even think about it anymore. Like I said though, everyone needs to decide for themselves how to best invest in their future.

How to Start an IRA

If you want to open an IRA to supplement your 401k, you can do so at any major brokerage. Webull is an example of a brokerage that allows you to open either a Traditional IRA or a Roth IRA. In fact, they will reward you with opening an IRA with them as well. If you sign up for their brokerage and deposit at least $100, they give you a free stock valued between $8-$1000. In addition to this, they will reward you with a gift card up to $1500 depending on how much you deposit. Check out our Webull Review for more information.

Open an IRA with Webull Today!

After reading this article, when would you rather be taxed? Now or later? Answer below in the comments! Also, if you have any additional questions, I’d be happy to answer them as well. Eric Baglio has been investing for over ten years and learned a lot of valuable lessons along the way. He has helped numerous people start investing on their own and founded Let’s Start Investing to help anyone willing to learn how to build wealth. His favorite brokerage is Webull and his favorite stock advising service is Motley Fool Stock Advisor.

Scroll back to top